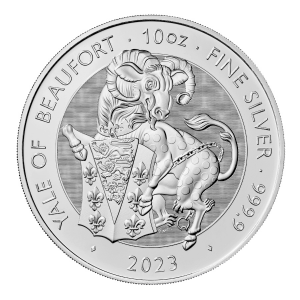 Continuation of the The Royal Tudor Beasts series from producer The Royal Mint. The reverse features an image of one of the ten heraldic Royal Beasts, The Yale Of Beaufort. The reverse was designed by David Lawrence. The obverse shows an image of Queen Elizabeth II, as well as the face value of the coin. The designer of the obverse was Jody Clark. The complete series will include 10 coins showing the image of animals - The Lion of England, The Bull of Clarence, The Tudor Dragon, The Greyhound of Richmond, The Royal Dragon, The Yale of Beaufort, The Seymour Unicorn, The Queen's Panther, The Queen's Lion and Seymour Panther.