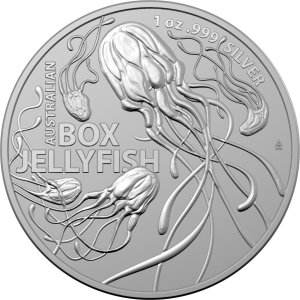 The fourth issue in Australia's Most Dangerous series from the producer Royal Australian Mint. The reverse depicts jellyfishes, the proof and weight of the metal. The obverse shows an image of Queen Elizabeth II designed by Jody Clark.
The jellyfish is one of Australia's most dangerous sea creatures. It is shaped like a bell or umbrella. Its box-like bell reaches up to 30 centimetres in diameter and its tentacles are up to three metres long.

The coin is legal tender within Australia and has a limited mintage of only 25000 pieces.