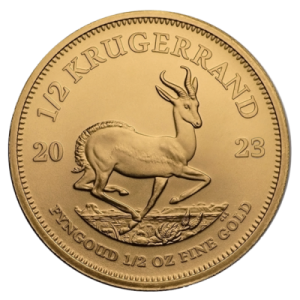 The Krugerrand is regarded as the world's most widely held and actively traded gold bullion coin minted by the South African Mint. The name of the coin comes from the name of the president of the Republic of South Africa- Paul Kruger in 1960s. The second part of the name "rand" is the name of the national currency in RSA. The gold coin was introduced in 1967 and has almost had the same look as it was by the first time. At the beginning it was only minted as 1 ounces gold coins, but in 1980 were added to the range the fractional Krugerrands (1/2oz, 1/4oz, 1/10oz). As one of the few coins, it is made of the lower gold finesse (Au 916) with a small copper additive. Thanks to that the coin has the characteristic reddish colour and the additional strength of scratches and deformations. On the obverse of this beautiful bullion coin we can see the Paul Kruger likeness and the name of the country South Africa in two languages ( African and English). The reverse of the coins shows the national symbol of South Africa- antelope Springbok. We can see there also the year of the coins issue and the lettering "Fyngoud 1oz fine gold" informing about the content of pure gold.