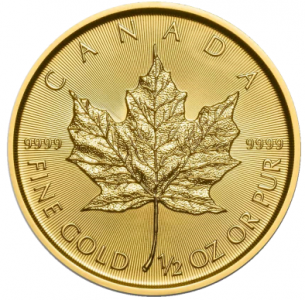 The Canadian Gold Maple Leaf coin is the most popular gold coin minted by The Royal Canadian Mint and one of the most popular pure gold coin in the world. Maple Leaf coin was introduced in 1979 and looks almost the same as it was by the first time.  The obverse of these beautiful bullion coin show the right-facing profile of Queen Elizabeth II, along with the year and face value. The reverse is adorned by the national symbol of Canada- Maple Leaf. We can see also there the information about metal finesse, which is made of (Au 999.9) and the name of the country, where is minted (Canada). The author of the coin's project was Walter Otto. Since 2015 both sides of the coin have additional lines in the background. The uniqueness of the line width and pitch gives this coin a characteristic look, and creates a light diffracting pattern that is specific to this coin. This coin has also many unique Security Feature to confirm the authenticity of Canadian Maple Leaf coin and to prevent her falsification. For example we can find the microengraved Maple Leaf on the reverse side. In the centre of this mark, visible under magnification, is the coin's year issue.