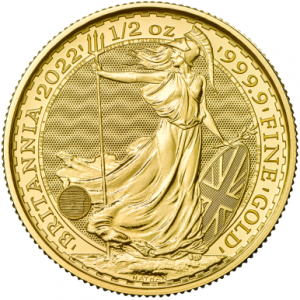 The Britannia is the most popular gold coin produced by the British Royal Mint. It was first introduced in 1821. This beautiful bullion coin on its obverse reveals the image of Queen Elizabeth II, Queen of United Kingdom in the crown, and the nominal value of the coin. The reverse of the coin remains unchanged and represents a traditional Britannia figure armed with a shield, an olive branch and a trident. In her surroundings we will find information with the name, metal finesse (999.9 fine gold) and weight of gold. The reverse was designed by Philip Nathan, and the obverse was done by Jody Clark.