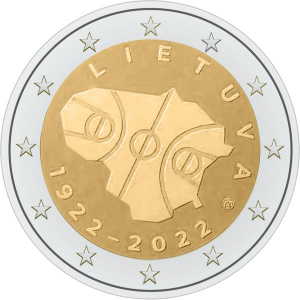 In Lithuania, basketball is an important part of culture, a special social phenomenon and a part of politics. The beginning of national basketball is considered to be the game between the Lithuanian Union of Athletes (LUPT) and the team of the Provisional Capital (Kaunas), which took place on April 23, 1922,

The national side of the coin depicts a map of Lithuania that resembles a basketball court. The upper part of the coin shows the name of the issuing country "LIETUVA" and the lower part shows the years "1922-2022", commemorating the first match and the date of issue. The coin also features the mark of the Lithuania Mint.