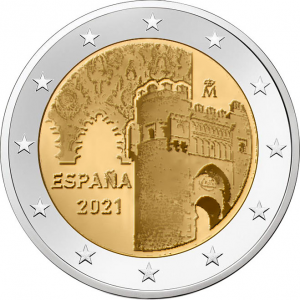 We are pleased to offer this newest release of Banco de Espana. This coin is the next of the series Patrimonio de la Humanidad de la UNESCO, which commemorates all of Spain's UNESCO World Heritage sites. The series began in 2010 and the order of the coins corresponds to the order in which the sites were declared World Heritage by UNESCO.

This year's edition is dedicated to two exceptional buildings located in the picturesque city of Toledo. The first monument, visible on the right side of the coin, is the city gate Puearta del Sol. The gate was named because of its orientation to the east, where the sun always rises. The second monument commemorated on this year's issue, which detal can be found on the upper left side of the coin, is the El Tránsito synagogue, famous for its rich stucco decoration.

The coin also features the logo of the Royal Spanish Mint (crowned letter M), the country name and date (ESPAÑIA 2021).