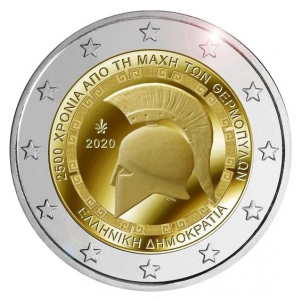 This €2 coin from Greece is dedicated to commemorating the 2500-year anniversary of the legendary Battle of Thermopylae in 480 BC, in which King Leonidas' Spartans fought and defeated the more numerous Persian army of Xerxes I.

The design depicts the helmet of ancient Hellenistic warriors along with the Greek inscription "2500 years since the Battle of Thermopylae."

The coin also features the year of issue, the Greek mint mark and the artist's monogram.